On Wednesday, we left beautiful Bali and headed to Jakarta for a few days. Ever since I started planning my Bali adventure, I’ve wanted to go to Jakarta to explore the city so I was pretty excited to be able to fit in a trip before I went home. My thoughts? Read on..

We landed Wednesday night and met up with Rollan’s dad for Kwetiaw Sapi – a beef noodle dish that is covered in a glue-like gravy. It tasted alright but all I could think of was that I was eating something that’s similar to the goo that covers an alien as it bursts out of a human stomach. Ugh. 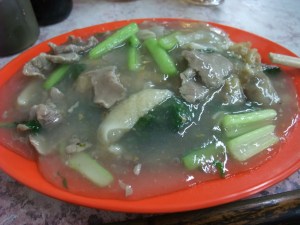 I quickly learned that Jakarta is quite known for a handful of things – malls and traffic jams being a couple of them. There are approximately 100+ malls in Jkt – everything from your super high-end shopping cities (literally) to your rinky-dinky Chinatown building. On our first day (Thurs), we hit up 2 of the larger malls – Grand Indonesia and Plaza Indonesia. Geeeze, the level of luxury in these places is ridiculous – more suited to a high end hotel than a shopping center! Over the remainder of the trip, we probably visited another 4 malls? Sigh – no more malls! And, no more traffic! I thought traffic in Bali was bad – boy was I wrong. One day, we sat in traffic for more than 4 hours!!! And that’s normal! Yikes, thanks but no thanks. 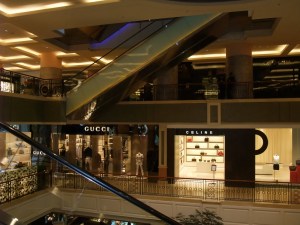 One of the more popular food dishes in Jkt is bakmi – a thick, ropey like noodle that is tossed in a secret (delicious) oil sauce and served with a side of clear broth. It was very good but we pretty much ate only that our entire trip – it’s good, but not that good. And it wasn’t just one place that we kept coming back to either. We ate it in a variety of places – from your chain restaurant, to a stall on the side of a street next to a sewage ditch to a tiny warung with cockroaches running around on the tables. I think I’m noodled out.

Rol, his dad and I headed out to Taman Mini one day. Taman Mini is basically an amusement park of sorts that features the architecture and culture of all the different provinces in Indonesia. And it wasn’t just each province that had it’s own little plot of land – the different regions within the provinces were able to showcase their culture as well. I’m glad I was able to experience a tiny snapshot of all the different place Indonesia has to offer – must come back and explore some of these cultures more fully! 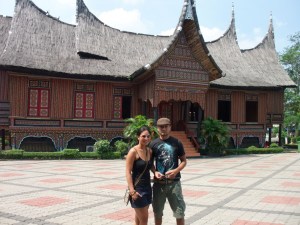 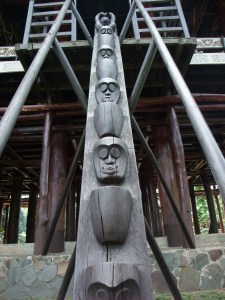 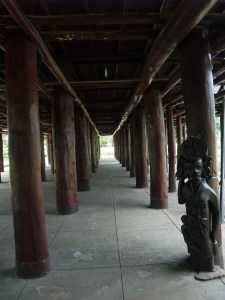 One day Rol and I ventured out on our own. Our mission? Ride the public buses to Glodok (basically Chinatown of Jkt) and back. While we didn’t ride the super sketchy metro-minis (broken down mini-vans), we did ride the main bus (that had AC thankfully). It cost 3500rp for a one way trip. All in all, the bus ride wasn’t that bad. I had heard bad things about pickpockets and such but I’m happy to report that all our belongings remained intact. It’s kinda cool but the main buses have a dedicated bus lane in the majority of streets – really increases the attractiveness of taking public transport as it’s reliable and quick – no sitting in traffic for these buses! My only real complaint was that a lot of people on the bus decided that wearing deodorant was faux pas. Ugh, it was super smelly in there. Natural BO plus the humidity of Jkt equals a really pungent ride! 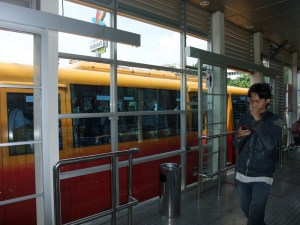 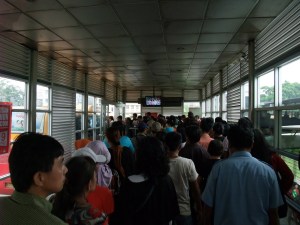 One of the queues to get on the bus 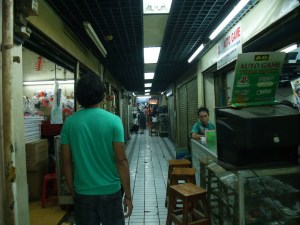 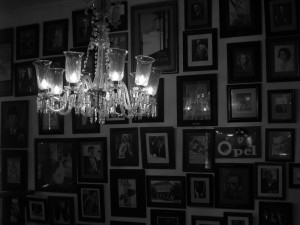 @ Cafe Batavia in Fatahillah Square – very cool decor. 17 500rp for an ice-tea though! 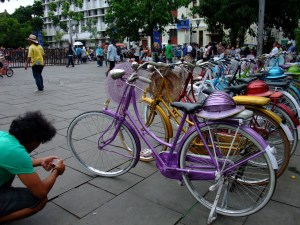 Checking out the wildlife @ Fatahillah Square

Another thing that Jkt is known for is its party scene. Lots of clubs, bars, and karoke lounges to satisfy any appetite (and if you’re looking for a more seedy scene, lots of brothels too!). On Friday night, we met up with Rol’s 2 friends Art and his cousin Kama and his gf Rica. I actually met Art back during the Olympics so it was nice to see a familiar face. We headed to Blowfish where a friend of Kama’s was celebrating her birthday. Oh yeah, this friend? Her family owns Ayana Resort (where Rock Bar is). Freaking redic. All in all, I had an amazing time at Blowfish – it was so much fun!! The music was the best I’ve heard in a very long time. Mostly hip-hop with a little old-school and top 40 thrown in. I felt like I was in one of my favorite dance movies. Although the crowd was a little wack (very cliquey and snobby) I did manage to meet a UBC student who was trying to get into commerce – random! On Saturday night, we went to Alexis (jealous Ros?) with Art and Kama. The scene is very different from anything I’ve ever partied in. The music wasn’t that great and the crowd was uh, interesting but I still had fun. And I’m glad I finally got to experience the ‘wonders’ of Alexis – although I’m pretty sure I’m of the wrong gender to fully enjoy them. From Alexis, Rol and I headed to Millennium – a pitch black, seedy club that was blaring tribal music. Needless to say, we headed home pretty quickly after that!

One of the bars @ Blowfish

A bottle of JW and a few drinks later… Rol, Art and I

G
etting ready for a night of shenanigans

Rol’s dad dropped us off at the airport Sunday night (after a day of hanging out with him in malls – what else?). Our flight was scheduled to leave at 7:20pm but we were still sitting at the gate by 9pm. We finally boarded and everything was pretty smooth until we tried to land in Bali. We were going in for the landing when we hit the ground hard(!) and suddenly started ascending again. The weather conditions (lighting and thunderstorm) were making it unsafe for us to land! Despite that, our captain tried to land again. This time, we didn’t even make it to the ground before we pulled back up. All the ups and downs were reeking havoc on my poor stomach – glad I didn’t chunder all over Rol! We finally headed to Surabaya – a city in Java about a 30min flight from Bali to wait out the storm. Hours later, we all filed back in the plane and this time landed successfully in Bali – at 4am. Our original arrival time? 10:02pm. The price you pay to be back in paradise…

While I’m glad that I got to have a Jktadventure, I’m ecstatic to be back in Bali. It just felt like home coming back here. This place has a very special place in my heart!